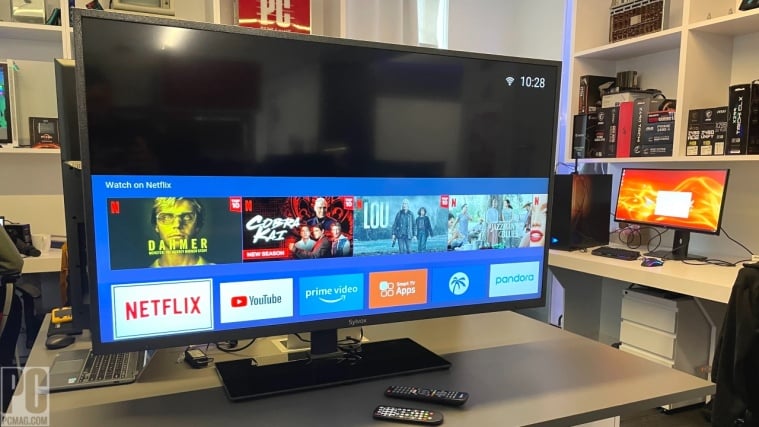 The Sylvox Pool Series Full Sun Outdoor TV finds itself in a bit of a quandary. On one hand, it gets incredibly bright, and at $2,299.99 for the 55-inch model we tested, it’s downright inexpensive for an outdoor TV. It puts out twice the light of the SunBriteTV Veranda Series 3 ($2,898.95 for 55 inches), and is within spitting distance of the Samsung's Terrace Full Sun ($9,999.99 for 65 inches). On the other hand, its smart TV platform feels like an antique and its colors aren’t particularly accurate. This isn’t a perfect TV, but it’s a strong value if you want a relatively affordable TV you can mount outdoors and watch in the sun.

You aren’t going to find much variation in outdoor TV designs. Each one we’ve tested has had a similar blocky shape because that’s what’s necessary to make a TV weatherproof. The Sylvox is covered in a matte black metal chassis with a slightly nubbly texture. The bezels measure 0.6 inches on the sides and top, and a full inch on the bottom, which holds the infrared remote sensor in the lower-right corner.

This is quite a thick TV (by modern standards) at 3.5 inches, with a large extension behind the screen shaped like an upside-down Y. This extension holds the TV’s connections, which face down in a recess on the bottom edge and are covered by a screw-on metal door with a foam rubber gasket. The connections include three HDMI ports (one eARC), two USB ports, a set of RCA component video inputs, an optical audio output, a 3.5mm headphone jack, an Ethernet port, and an antenna/cable connector. The PC-like power cable connects here as well, which is surprising for an outdoor TV; most we’ve seen have permanently attached power cables. A standard VESA mount is on the rear as well. 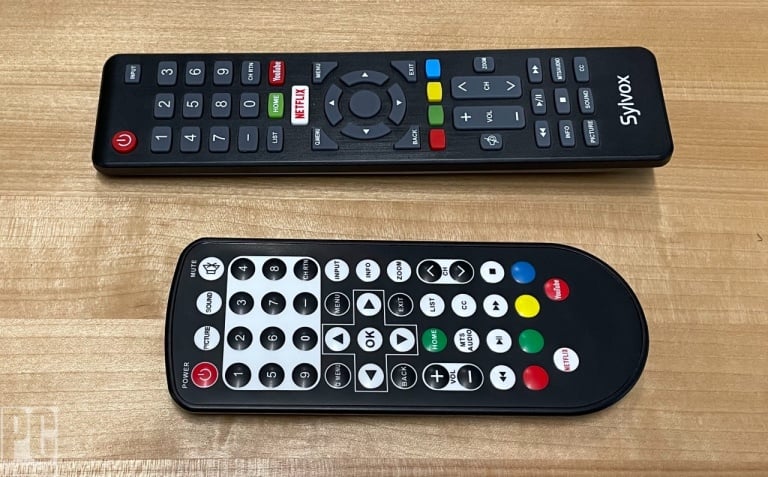 Two remotes are included, one clearly weatherproofed and the other a standard remote. The weatherproof remote is a flat black device covered in membrane buttons. There’s a number pad, a navigation pad, volume and channel buttons, playback controls, and dedicated service buttons for Netflix and YouTube, but they’re all the same circular shape and arranged in a grid that makes it very difficult to use without looking directly at the remote. The other remote is a standard button-laden wand reminiscent of older HDTVs, with a circular navigation pad flanked by a number pad above and volume, channel, and playback controls below. The non-weatherproof remote is much easier to use by feel (though not as much as streamlined modern remotes), but it is vulnerable to drops and splashes.
Both the TV and the weatherproof remote have IP55 ratings, which means they can handle rain and dirt without issue. This is the same IP rating as the Veranda 3 and The Terrace.

Apps From an Older Age 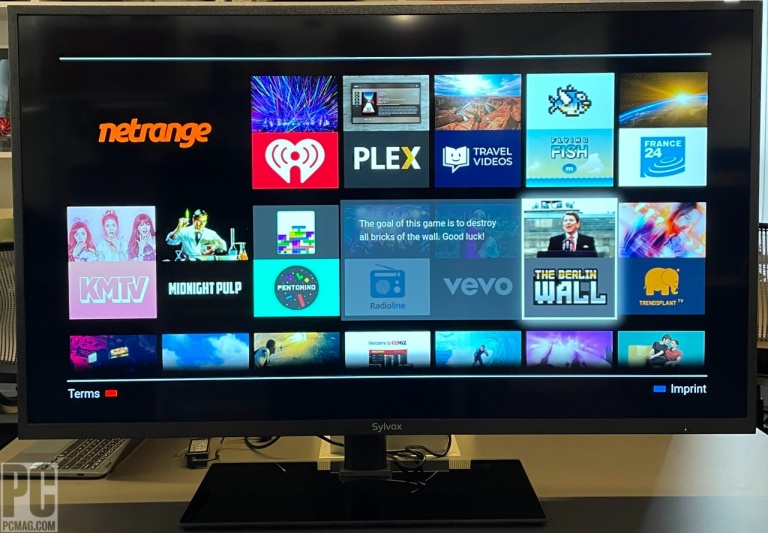 The smart TV interface is another blast from the past. Sylvox doesn’t use one of the six major smart TV platforms (even the mediocre Furrion outdoor TV uses a strange, antiquated version of LG’s webOS) and instead runs Netrange. Netrange is a connected system developer that produces Android- and Linux-based smart TV systems and doesn’t seem to have a significant presence in North America.

The menu design of the user interface appears to be Android, but the distinction is academic at best; this isn’t an Android TV or Google TV-based system, but rather a simplified portal that provides access to a few dozen apps and services, and that’s about it. There’s Amazon Prime Video, Netflix, YouTube, and a Plex client, and a handful of smaller apps like Midnight Pulp and an in-TV game where you play Breakout with a Berlin Wall while a pixelated Ronald Reagan watches you. It definitely has a 10-year-old smart TV feel, right down to Facebook and Twitter apps offered under the assumption that people want to use those services on their TV.

Basically, if you want to use most major streaming services, you should get a media streamer that can plug into the back of the TV behind the door like an Amazon Fire TV Stick 4K, Chromecast With Google TV 4K, or Roku Streaming Stick 4K.

The Sylvox Weatherproof Full Sun Outdoor TV is a 4K TV with a 60Hz refresh rate. It supports high dynamic range (HDR) content in HDR10. It doesn't support Dolby Vision. The TV has an ATSC tuner, but it is not ATSC 3.0.

We test TVs with a Klein K-80 colorimeter(Opens in a new window), a Murideo SIX-G signal generator(Opens in a new window), and Portrait Displays’ Calman software(Opens in a new window). When measuring the TV’s contrast, we ran into an odd hiccup. Like many TVs, the Sylvox has an ambient light sensor that can adjust the screen’s brightness based on the conditions around it. Unlike most TVs, the sensor cannot be disabled (which we recommend for almost all cases). To get the most accurate contrast results in our tests, we had to shine a bright light directly at the sensor to force the TV to boost its brightness. Without this direct light, even in a well-lit room, we measured a very low peak brightness of around 250 nits. This is important to keep in mind if you want to use the TV in the evening.

With the light sensor stimulated, the Sylvox TV showed a peak brightness of 1,121 nits, with little difference between a full-screen white field and an 18% white field. This didn’t vary much between an SDR and an HDR signal, either. Sylvox claims the TV can reach up to 1,500 nits, and this is reasonably close (anything over 1,000 nits is quite bright, and with the light sensor it’s certainly possible that the screen could be boosted closer to the claimed levels). Black levels are high, which is fairly standard for outdoor TVs; we measured 0.362cd/m^2 for a contrast ratio of 3,097:1. This is about in line with the SunBriteTV Veranda 3 (3,631:1 at 722 nits, thanks to its lower 0.199cd/m^2 black level). The much more expensive Terrace Full Sun TV gets both brighter (1,404 nits) and darker (0.17cd/m^2) for double the contrast ratio at 7,606:1. 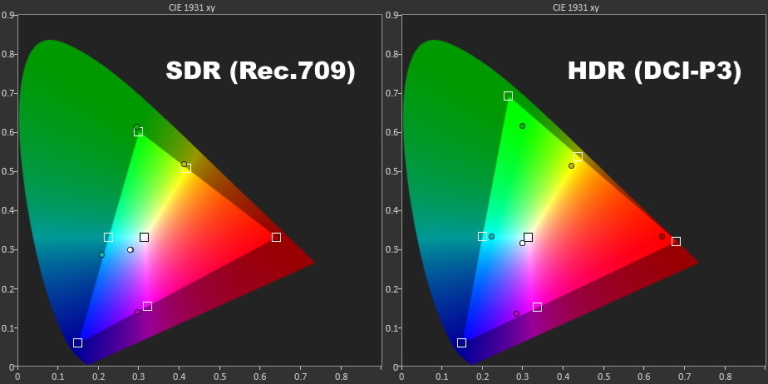 The above charts show color levels in Movie mode with an SDR signal compared against Rec.709 broadcast standards, and with an HDR signal compared against DCI-P3 digital cinema standards. Even at the warmest color temperature setting, white levels appear overly cool. Whites and cyans are a bit more accurate in HDR, but oddly the primary colors are almost unchanged between the two signals.

With our simulated daylight shining on the light sensor, BBC’s Planet Earth II looks bright and vivid. Greens and green-yellows from plants and blues and teals of water and sky are vibrant and natural, and fine textures like fur generally come through clearly. However, objects in shade can appear a bit muddy.

Poor weather prevented us from seeing how the TV’s screen handles glare from bright sunlight, but it deals with overhead indoor lights fairly well. Some glare can be seen, but it’s slightly diffused by the screen’s finish, which doesn’t make the picture look smeared or blurry. Off-angle viewing is strong, with little color desaturation or contrast shift. 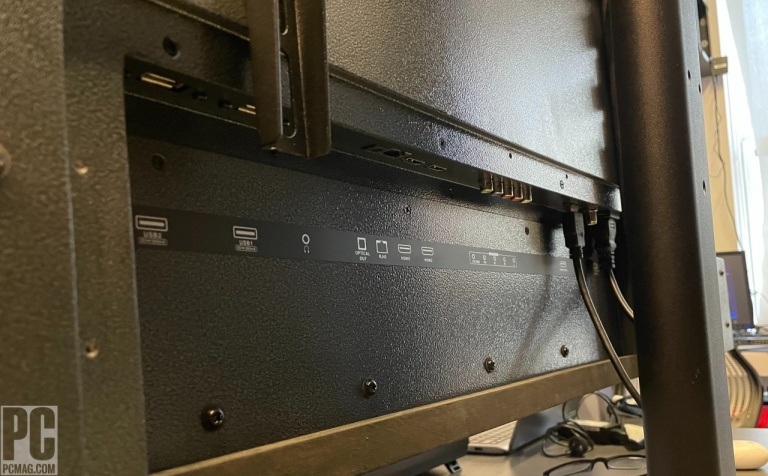 The red of Deadpool’s costume in the opening, overcast scenes of Deadpool looks vivid, almost to the point of appearing a bit oversaturated. Later, in the burning lab fight, the flames look bright but somewhat homogenous, with yellows and oranges blending together rather than showing a variety of hues. Shadow details in this scene look a bit washed-out.

Shadow details become muddy again in the party scenes of The Great Gatsby. The whites of lights, balloons, and shirts appear bright, but the contours and cuts of black jackets tend to simply disappear. Skin tones look slightly cool and also appear a bit oversaturated; no one looks gaunt, but the color balance is still a bit off.

It's Not for Gaming

Using an HDFury Diva HDMI matrix(Opens in a new window), we measured the Sylvox’s input lag in Movie mode at 43.9 milliseconds. The good news is that this is very low compared with most TVs’ non-gaming modes. The bad news is that the TV doesn’t have a gaming mode at all, which means this really isn’t suitable for gaming.

If you want an outdoor TV you can reliably play games on with little lag, the SunBriteTV Veranda 3 has a Game mode with just 8.6ms of latency.

The Most Affordable Outdoor TV

The Sylvox Pool Series Full Sun Outdoor TV is appealing as a budget-friendly TV you can mount on your deck or by your pool. It’s pricey compared with indoor TVs, but it's downright cheap compared with the SunBriteTV Veranda 3 and the Samsung Terrace. An inexcusably ancient smart TV platform and inaccurate and occasionally cartoonish color hold it back some, but it’s weatherproof, bright enough to easily see outside, and significantly undercuts those other models on price. We just wish its light sensor could be disabled.